Two Photos that Show the Life-Saving Benefits of Fire Doors 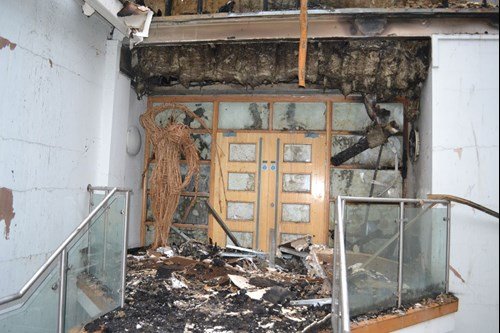 When a fire ripped through the creative arts block at a Dorset school it was a blessed relief that the fire-safety professionals had done their job properly and shows the benefits of fire doors. 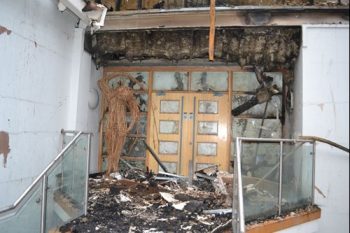 Pictures released by Dorset Fire & Rescue Service last year demonstrate starkly the benefits of fire doors in slowing the spread of fire, restricting damage and – most importantly of all – giving people more time to evacuate.

Readers might recall seeing these benefits play out under test conditions – during a live fire door test by the British Woodworking Federation for example. But it’s rare as it is helpful to see the benefits in a real-life scenario too.

The fire, which began on the roof, fortunately occurred during school holidays. It had been burning for more than hour before a 999 call was made. By the time fire engines arrived it was impossible for firefighters to get near it so the blaze remained unsupressed for several more hours – and still, the fire doors stood firm, as the pictures clearly demonstrate.

“We took photos in the aftermath of this school fire, which clearly show the value of fire doors,” said Andy Fox, head of fire safety at Dorset Fire & Rescue Service. “It’s usually difficult to describe just how important they are but these pictures need no description and show exactly how effective correctly installed and maintained fire doors can be.” 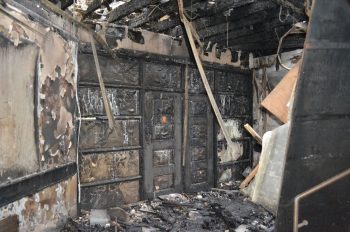 Neil Ashdown, general manager of the Fire Door Inspection Scheme added: “These images show just how important it is to ensure that the people responsible for fire-door installation and maintenance are aware of the faults we see.

“From gaps between doors and frames and unsuitable hinges to incorrectly fitted or missing seals, the problems are all too common. It is crucial that before a fire occurs these issues are addressed and an effective inspection regime is in place so that all fire doors can work as well as these.”

We use cookies to ensure that we give you the best experience on our website. If you continue to use this site we will assume that you are happy with this.Accept Read More